Barite is a mineral composed of barium sulfate, BaSO4. It is usually colorless or milky white, but can be almost any color, depending on the impurities trapped in the crystals during their formation. Barite is relatively soft, measuring 3-3.5 on Moh’s scale of hardness. It is unusually heavy for a non-metallic mineral. The high density is responsible for its value in many applications. Barite is chemically inert and insoluble.

Barite (BaSO4) is the most common mineral of Barium. It occurs as a vein filling and as a gangue mineral in silver, zinc, copper, nickel and lead ores. It is colourless or white, often tinged with yellow, red, brown or bluish. Barite is used in the production of wallpaper and asbestos goods as well as in the manufacture of white paint.
Barite (barium sulphate) is a fairly common heavy mineral that often occurs in Pb-Zn ore deposits as a gangue mineral, in sedimentary deposits, and rarely in basalts. When found in sufficient quantity, it is mined for it’s barium content. It occurs either in crystalline form, as tabular, prismatic, or bladed crystals, sometimes as a “cockscomb” habit, or else massive. It is often colourless, cream-coloured or white, but may also be yellow, blue, pink or brown.
Barite, a name that was derived from the Greek word “barus” (heavy), is the mineralogical name for barium sulfate. In commerce, the mineral is sometimes referred to as “barytes.”
The term “primary barite” refers to the first marketable product, which includes crude barite (run of mine) and the products of simple beneficiation methods, such as washing, jigging, heavy media separation, tabling, flotation, and magnetic separation. Most crude barite requires some upgrading to minimum purity or density. Barite that is used as an aggregate in a “heavy” cement is crushed and screened to a uniform size. Most barite is ground to a small, uniform size before it is used as filler or extender, an addition to industrial products, or a weighting agent in petroleum well drilling mud specification barite. Although barite contains a “heavy” metal (barium), it is not a toxic chemical under Section 313 of the Emergency Planning and Community Right-to-Know Act of 1986, because it is very  insoluble.

Barium: used as a heavy additive in oil-well-drilling mud; in the paper and rubber industries; as a filler or extender in cloth, ink, and plastics products; in radiography (“barium milkshake”); as getter (scavenger) alloys in vacuum tubes; deoxidizer for copper; lubricant for anode rotors in X-ray tubes; spark-plug alloys. Also used to make an expensive white pigment.
By far, the principal use for barite is as a “weighting agent” in oil and natural gas drilling. In this process, barite is crushed and mixed with water and other materials. It is then pumped into the drill hole. The weight of this mixture counteracts the force of the oil and gas when it is released from the ground. This allows the oil and gas rig operators to prevent the explosive release of the oil and gas from the ground. Currently, over 75% of barite consumption in the U.S. is for this drilling application. However, the consumption in drilling “mud” fluctuates from year to year, as it is dependent on the amount of exploration drilling
for oil and gas, which in turn depends on oil and gas prices.
BARITE (Barium Sulfate) with the chemical formula of BaSO4. is used as a weighting agent in all types of drilling fluids. Application of barite , Increase mud density up to 21 lb/gal (2.5 g/cm3)
• Control formation pressure
• Stabilize the borehole
• Prepare solids-laden plugs for well control applicatio 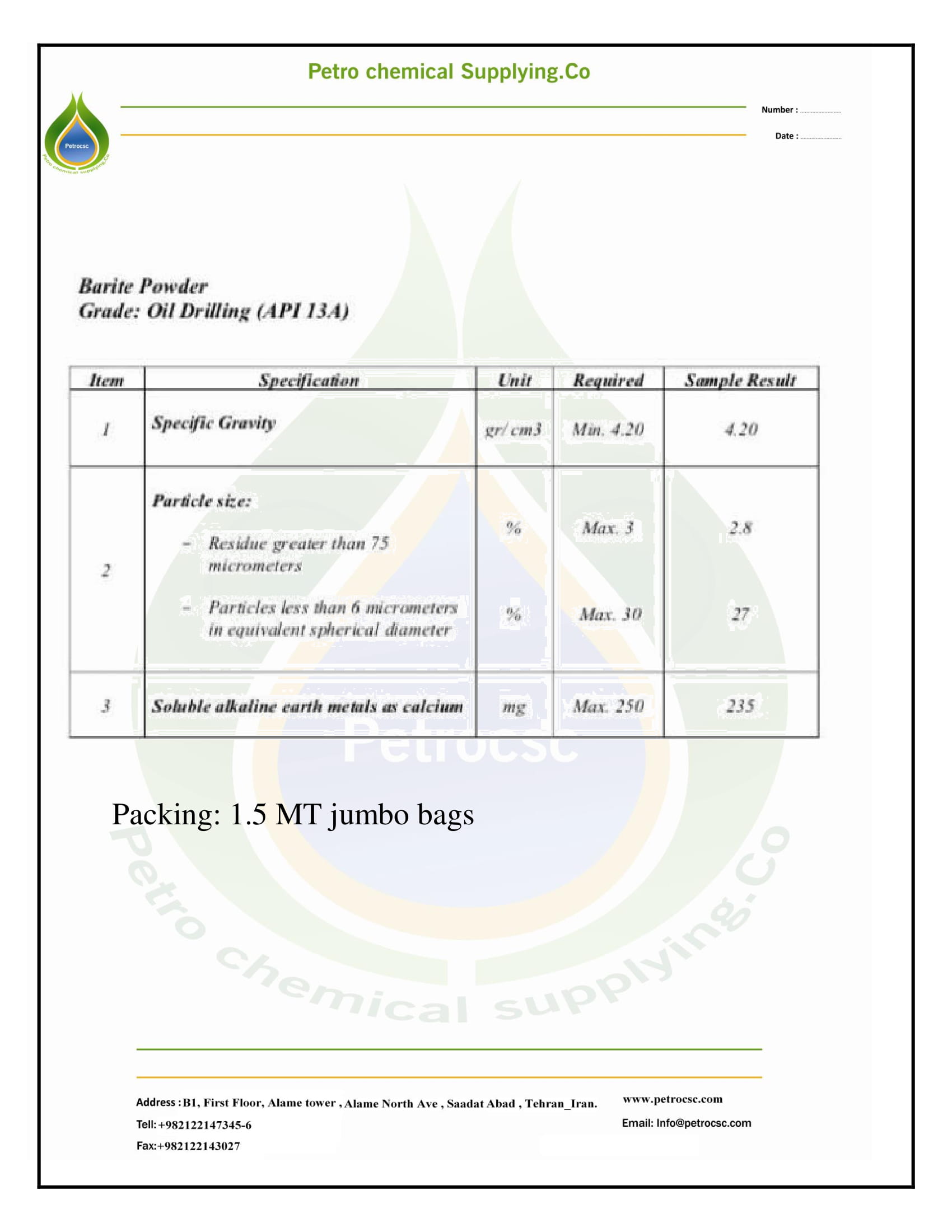 Catalogue
FacebookTwitterLinkedInPinterest
Open chat
1
Need help?
Powered by
Hello
You can contact with our Sales Team here
Go to Top