Bentonite is a clay generated frequently from the alteration of volcanic ash, consisting predominantly of smectite minerals, usually montmorillonite. Other smectite group minerals include hectorite, saponite, beidelite and nontronite. Smectites are clay minerals, i.e. they consist of individual crystallites the majority of which are <2µm in largest dimension. Smectite crystallites themselves are three-layer clay minerals. They consist of two tetrahedral layers and one octahedral layer. In montmorillonite tetrahedral layers consisting of [SiO4] – tetrahedrons enclose the [M(O5,OH)]-octahedron layer (M = and mainly Al, Mg, but Fe is also often found). The silicate layers have a slight negative charge that is compensated by exchangeable ions in the intercrystallite region. The charge is so weak that the cations (in natural form, predominantly Ca2+, Mg2+ or Na+ ions) can be adsorbed in this region with their hydrate shell. The extent of hydration produces intercrystalline swelling. Depending on the nature of their genesis, bentonites contain a variety of accessory minerals in addition to montmorillonite. These minerals may include quartz, feldspar, calcite and gypsum. The presence of these minerals can impact the industrial value of a deposit, reducing or increasing its value depending on the application. Bentonite presents strong colloidal properties and its volume increases several times when coming into contact with water, creating a gelatinous and viscous fluid. The special properties of bentonite (hydration, swelling, water absorption, viscosity, thixotropy) make it a valuable material for a wide range of uses and applications.

Bentonite deposits are normally exploited by quarrying. Extracted bentonite is distinctly solid, even with a moisture content of approximately 30%. The material is initially crushed and, if necessary, activated with the addition of soda ash (Na2CO3). Bentonite is subsequently dried (air and/or forced drying) to reach a moisture content of approximately 15%. According to the final application, bentonite is either sieved (granular form) or milled (into powder and super fine powder form). For special applications, bentonite is purified by removing the associated gangue minerals, or treated with acids to produce acid-activated bentonite (bleaching earths), or treated with organics to produce organoclays.

Bentonite is used as a bonding material in the preparation of molding sand for the production of iron, steel and non-ferrous casting. The unique properties of bentonite yield green sand moulds with good flowability, compactability and thermal stability for the production of high quality castings.

Bentonite is used for cat litter, due to its advantage of absorbing refuse by forming clumps (which can be easily removed) leaving the remaining product intact for further use.

Bentonite in civil engineering applications is used traditionally as a thixotropic, support and lubricant agent in diaphragm walls and foundations, in tunnelling, in horizontal directional drilling and pipe jacking. Bentonite, due to its viscosity and plasticity, also is used in Portland cement and mortars.

Bentonite’s adsorption/absorption properties are very useful for wastewater purification. Common environmental directives recommend low permeability soils, which naturally should ontain bentonite, as a sealing material in the construction and rehabilitation of landfills to ensure the protection of groundwater from the pollutants. Bentonite is the active protective layer of geosynthetic clay liners.

Another conventional use of bentonite is as a mud constituent for oil and water well drilling. Its roles are mainly to seal the borehole walls, to remove drill cuttings and to lubricate the cutting head.

Bentonite is utilized in the removal of impurities in oils where its adsorptive properties are crucial in the processing of edible oils and fats (Soya/palm/canola oil). In drinks such as beer, wine and mineral water, and in products like sugar or honey, bentonite is used as a clarification agent.

Bentonite is used as an animal feed supplement, as a pelletizing aid in the production of animal feed pellets, as well as a flowability aid for unconsolidated feed ingredients such as soy meal. It also is used as an ion exchanger for improvement and conditioning of the soil. When thermally treated, it can be used as a porous ceramic carrier for various herbicides and pesticides.

Cosmetics and Medical Markets: Bentonite is used as filler in pharmaceuticals, and due to its absorption/adsorption functions, it allows paste formation. Such applications include industrial protective creams, calamine lotion, wet compresses, and antiirritants for eczema. In medicine, bentonite is used as an antidote in heavy metal poisoning. Personal care products such as mud packs, sunburn paint, baby and facepowders, and face creams may all contain bentonite.

Laundry detergents and liquid hand cleansers/soaps rely on the inclusion of bentonite, in order to remove the impurities in solvents and to soften the fabrics.

Dyes and Polishes: Due to its thixotropic properties, bentonite and organoclays function as a thickening and/or suspension agent in varnishes, and in water and solvent paints. Its adsorption properties are appreciated for the finishing of indigo dying cloth, and in dyes (lacquers for paints & wallpapers).

Bentonite is crucial to paper making, where it is used in pitch control, i.e. absorption of wood resins that tend to obstruct the machines and to improve the efficiency of conversion of pulp into paper as well as to improve the quality of the paper. Bentonite also offers useful de-inking properties for paper recycling. In addition, acid-activated bentonite is used as the active component in the manufacture of carbonless copy paper.

Catalyst: Chemically-modified clay catalysts find application in a diverse range of duties where acid catalysis is a key mechanism. Most particularly, they are employed in the alkylation processes to produce fuel additives.orillon, in Southern France. 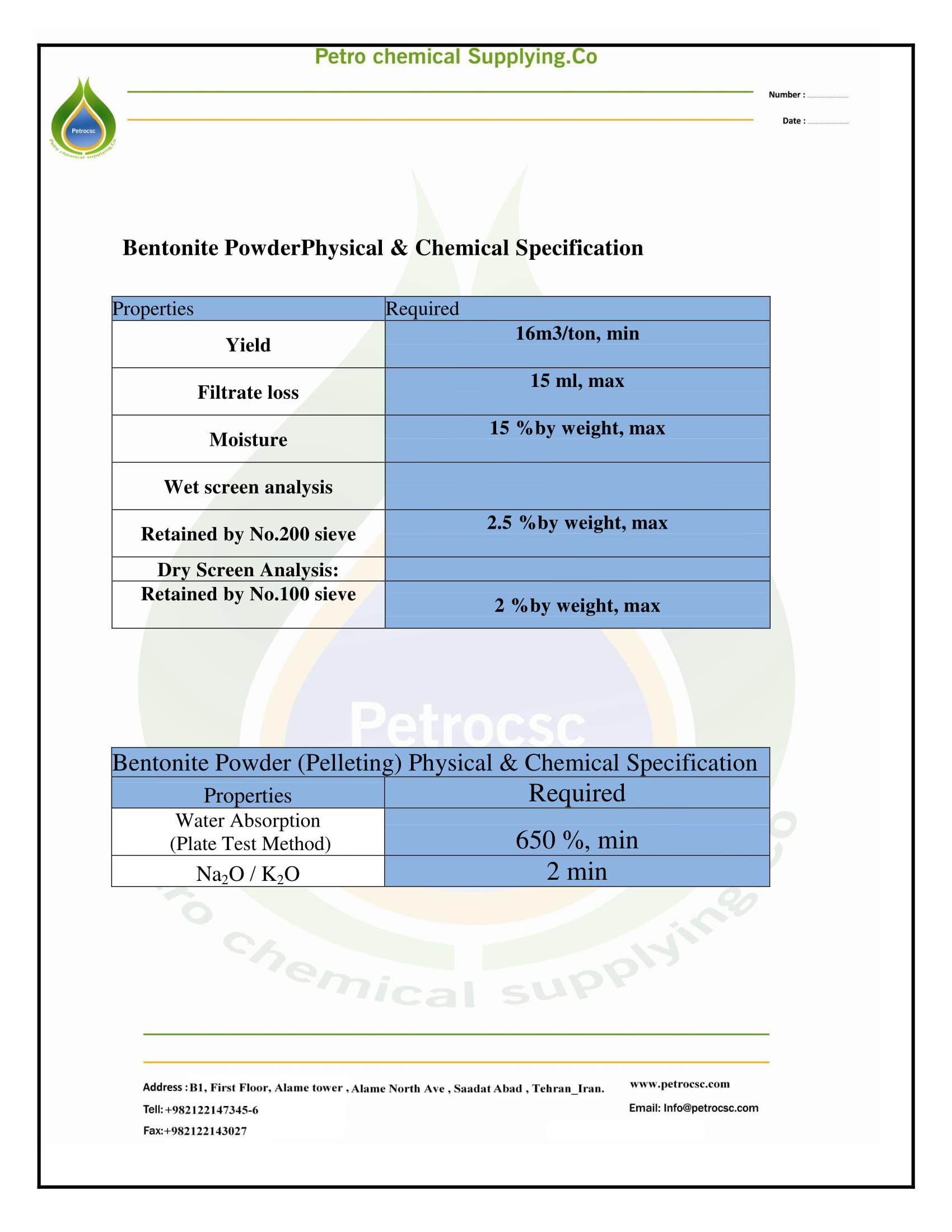